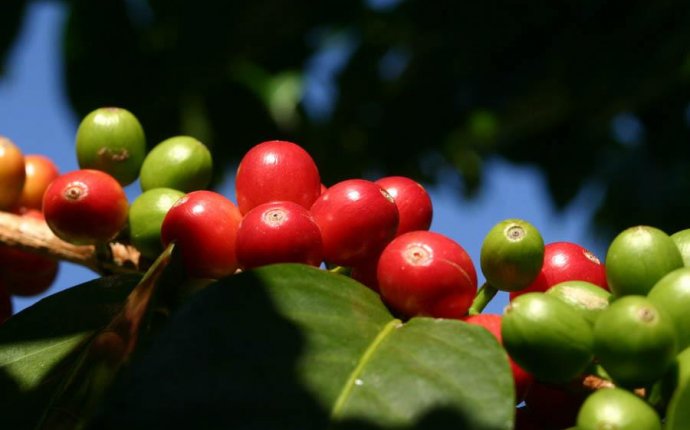 For hundreds of years, Arabia strictly controlled coffee production, making it virtually impossible to export viable seeds outside of the Arabian Peninsula. Indeed, the very first fertile seeds were smuggled out by Baba Budan during his pilgrimage to Mecca in around 1600. The seedling that made its way from Paris to Martinique traces its roots to these very beans. As with most small trees, it is possible to propagate coffee plants from cuttings or shoots as well as from fertile seeds. The most successful and commercially viable way is to start new plants is from seeds selected from trees of known quality, productivity, and longevity. With proper care, leaves will appear in four to eight weeks. These leaves are called Orelbas de Onca or “panther ears” by Brazilian growers and indicates that the seedlings are ready to be transplanted to the nursery.

Soldado: A Latin American word used to describe sprouting coffee because of the similarity to a soldier standing at attention capped by a helmet-like bean.

Protected from the intense tropical sun by large shade trees, the seedlings are transplanted into beds or containers which are raised above normal soil level to encourage thorough drainage. In this protected nursery environment, the new coffee plants are nurtured from nine to eighteen months, reaching a height of about 24 inches. Growers will carefully increase exposure to sunlight over time to harden the young plants and ready them for transplanting on the more exposed plantation. On average it takes about 5 years for the coffee bush to reach maturity; at which point it yields approximately one pound of roasted coffee per year.

There is usually one major harvest per year, and it is labor intensive. Specialty coffee is always hand-picked to ensure that only ripe cherries are picked. Coffee pickers, make multiple passes typically every 8-10 days throughout the harvest season which can last four to six months. A good picker can harvest as much as 200 pounds of fruit each day, the equivalent of 50 to 60 pounds of raw coffee beans. Combine this effort with the high elevations and mountainous terrain that is favored for coffea arabica and it is easy to see how challenging and rewarding it is to grow coffee.

Cafe de Panno: Term used in Brazil for coffee picked in the cloth; i.e., a cotton sheet is spread on the ground under the trees. The fruit is then allowed to ripen and fall to the sheet, never touching the ground.

Processing the coffee cherries involves the critical removal of husk and fruit from the beans and the subsequent drying of the beans to 11% moisture content. There are two main processing methods and the one used reflects local tradition, available resources and industry goals. The chosen processing method can have an integral impact on the flavor profile. For example, the wet-hulled process of Indonesia plays a big part in the earth tones and lower acidity of their coffee. It is arguable how much the flavor profile has to do with the characteristics of the growing region or the processing, but what can be assured is that all of these factors work in concert to give each coffee their distinct and special qualities.

The Dry Method or the Natural Method is the simplest and oldest method of preparation. Over 60% of the world’s coffees are processed this way. Harvested cherries are laid out on cane matting or brick patios under the hot sun. To ensure even drying and prevent spoilage, they are raked and turned several times a day. They are covered at night or in the event of rain. It takes 2-3 weeks of good, dry weather to thoroughly dry the cherries. Success depends on good weather.

The Wet Method or Washed Method is used where fresh water is abundant. There are several variations of the wet method but generally, harvested cherries are poured into large, water-filled tanks to soften the outer husk and pulp. Thus softened, the cherries are run through a pulping machine to actually remove and wash away the husk and pulp from the parchment covered beans. These beans, still covered in their silver skin, are sorted by weight via water channels and then by size in rotating drums. The separated beans are placed in large tanks filled with water. Sitting in these tanks for 12 to 48 hours a natural enzyme causes a fermentation process in which the layer of mucilage (parenchyma) attached to the parchment is dissolved. They are then dried in much the same way as the Dry Method. In some cases, these beans may be dried in large drying machines that shorten drying time of parchment coffee to 24 to 36 hours.

Cafe Pergamino, also known as parchment coffee, is said to be "in the parchment" when dried, after the outer skin and pulp have been removed by water. Some European markets require coffee exported to them in this manner.

Beneficio: a Mexican term, is the preparation area on a plantation where the drying terraces, fermentation tanks, washing vats, and warehouses are located.

Processed coffee is stored at origin in sisal or jute bags until they are ready for export. A combination of modern machinery and seasoned hands take coffee through the final processing stages to hull and sort the beans for the world market. Hulling is done by machines. For dry processed coffees, hulling involves the removal of the exocarp, mesocarp and endocarp or the entire husk. For wet processed coffees, only the endocarp need be removed since the others have already been discarded. Afterwards, some beans may be polished to remove any silver skin that remains. Traditionally polished coffees are considered superior but many argue that the benefit is negligible.