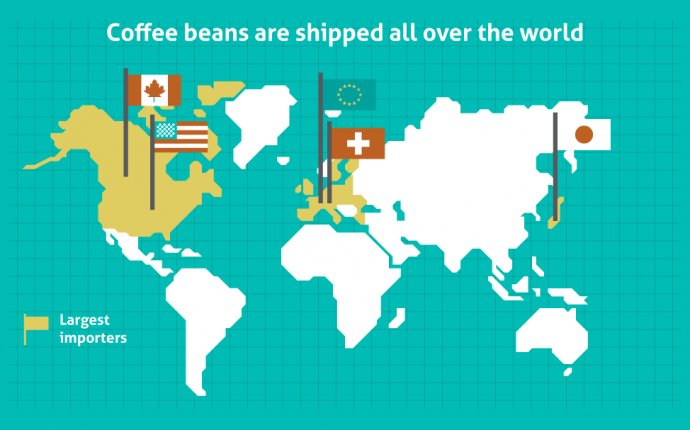 What country do coffee beans come from?

On a recent trip to Costa Rica with Contiki Travel, I took a tour of a coffee plantation. As an avid coffee enthusiast (okay, bordering on addict), I was confronted with a very humbling question, "Do you know where your coffee beans come from?"

Costa Ricans typically drink coffee at home without sugar or cream (forget pumpkin spice lattés). Instead, it's enjoyed "like a good glass of wine, " said my tour guide at Don Juan Coffee Plantation— straight black so you can swirl the aroma and smell and taste all of the different flavors. And like a good glass of wine, the flavor of the coffee directly relates to where it's grown and produced. "If you don't know where it's from, you don't know why you do or don't like it, ” the tour guide said.

But figuring out where your coffee is from can be hard. You can scour the website of your local coffee shop and see if you can figure it out that way. Stumptown Coffee Roasters is the model child for transparency, offering profiles of the coffee producers on their website. However, the bigger coffee fish are a little less decipherable—primarily because of their scale and need to source from all of the major coffee regions. However, some of their more popular blends can be pinned, so I did a little digging.

Where Your Favorite Beans Are From
Naturally, Starbucks sources arabica coffee from three key growing regions, Latin America, Africa, and Asia-Pacific, a spokesperson for the coffee empire confirms, but their signature coffee blends are mostly from the Asia-Pacific region.

On the other hand, Dunkin' Donuts gets theirs from just Latin America, says Michelle King, director of global public relations at Dunkin' Brands, Inc.

The illy blend is made from nine beans sourced via direct trade in Latin America, India, and Africa, according to Master Barista Giorgio Milos. The company recently launched MonoArabica, the first single-origin coffee from the company in 80 years, which comes from Brazil, Guatemala, and Ethiopia.

What Different Regions Taste Like
Latin American coffees are balanced and known for their crisp, bright acidity, as well as their flavors of cocoa and nuts. The palate-cleansing acidity is a result of the climate, volcanic soil, and fermentation process used in the preparation of these coffees, says a spokesperson for Starbucks. It's what adds the "zest" to your cup.

African coffees offer flavor notes that range from berries to exotic spies to citrus fruits, and aromas that offer hints of lemon, grapefruit, flowers, and chocolate. Some of the world's most unusual and sought-after coffees come from this region, the Starbucks spokesperson says. Think: flavors of wine.

And the Asia-Pacific region is home to coffees that range from assertive herbal spiciness and depth typical of semi-washed coffees from Indonesia to the balanced acidity and complexity that define the washed coffees of the Pacific Islands. Because of their full-flavor and character, the Asia-Pacific beans are found in many of Starbucks signature coffee blends.

To become a real coffee connoisseur, figuring out which flavors you prefer in your coffee and how much will help you refine your favorite blend. And if you ever get caught with the question, "Do you know where your coffee comes from?”, you won't have my embarrassing response: “...Starbucks?”