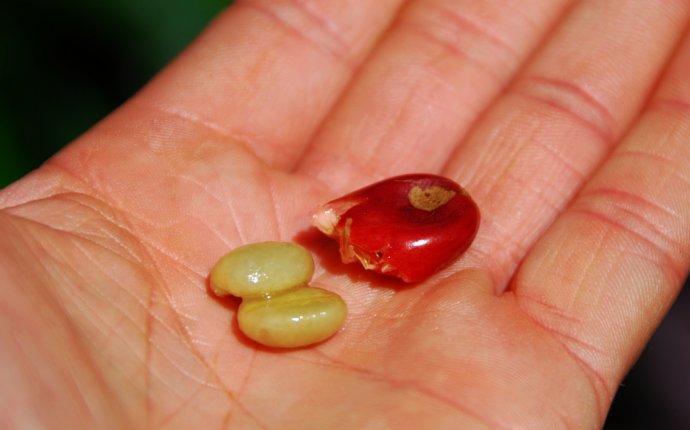 The coffee fruit can be divided into two main parts, the pericarp and the seed.

Pericarp
The pericarp is the outer three layers of the fruit: the exocarp (skin), mesocarp (mucilage), and endocarp (parchment).

Exocarp (Skin)
The exocarp, also referred to as the peel, skin, or epicarp, is the outermost layer of the coffee fruit. It is formed by a single layer of compact parenchyma cells (cells with thin primary walls that contain chloroplasts and are capable of absorbing water). The color of the exocarp at the beginning of fruit development is green due to the presence of chloroplasts which then disappear as the fruit matures (Castro and Marracini, 2006). Color upon maturation depends upon coffee variety, but is most commonly red or yellow. Red skin color comes from anthocyanin pigments, while yellow skin color is attributed to luteolin (Borem, 2008).

Mesocarp (Mucilage)
The mesocarp, also referred to as the mucilage, is the flesh of the coffee fruit. While “pulp” can sometimes refer to solely the mesocarp, the term usually refers to a combination of the exocarp and part of the mesocarp removed during pulping. In unripe coffee fruit, the tissue is rigid. With maturation, pectolytic enzymes break down pectic chains, resulting in an insoluble hydrogel that is rich in sugars and pectins (Borem, 2008). Studies have shown that the mucilage/water ratio of the mesocarp increases as growing altitude increases (Borem, 2008). In the wet processing method, this mucilage layer is removed through controlled fermentation. In the dry method, the mucilage, along with the exocarp and endocarp, is left intact during drying (see Harvest and Post-harvest) for more information).

Endocarp (Parchment)
The endocarp, or parchment, is the innermost layer of the pericarp and is the hull that envelops the coffee bean. It is formed of three to seven layers of sclerenchyma cells (fibrous cells that serve as the principal support cells in plants). The cells of the endocarp harden during coffee fruit maturation, thus limiting the final size of the coffee seed, or bean. In arabica coffee, the average weight of the parchment with 11% moisture content is around 3.8% of total coffee fruit weight (Wilbaux, 1961, as cited in Borém, 2008).

Seed
The coffee seed, or bean, comprises a silver skin, an endosperm, and an embryo. Coffee seed (bean) sizes vary; however, they average 10mm long and 6mm wide.

Silver Skin
The silver skin, also called the perisperm or spermoderm, is the outermost layer that wraps the seed. It is formed from the nucellus, or central portion, of the ovule. Generally some remnants of the silver skin remain on the bean pre-roast, and come off during coffee roasting as chaff. The silver skin may be polished off of the bean; however, it is generally accepted that this diminishes coffee flavor. It has also been proposed that the presence of a large amount of silver skin on milled coffee is a sign of coffee picked before its ideal ripeness. In some regions the silver skin may take on a darker hue, in which case the beans are called fox beans. Fox beans are not considered to be a defect.

Endosperm
The endosperm is the principal reserve tissue of the seed, and is composed of only one tissue, though the cells in the exterior and interior portion of the endosperm vary in oil content and cell wall thickness. The chemical content of the endosperm is of utmost importance since it is the precursor to the flavor and aroma of roasted coffee. The chemical compounds found in the endosperm can be classifed as soluble or insoluble in water. The water-soluble compounds are caffeine, trigonelline, nicotinic acid (niacin), at least 18 chlorogenic acids, mono-, di-, and oligosaccharides, some proteins and minerals, and carboxylic acids. Components insoluble in water include cellulose, polysaccharides, lignin, and hemicullulose, as well as some proteins, minerals, and lipids (Borem, 2008).

Embryo
The embyro is composed of a hypocotyl (embryo axis) and two cotyledons and is 3-4 mm long (Wintgens, 2009). Coffee seeds germinate via epigeal germination, in which the hypocotyl elongates and pushes the seed upward above ground. The original cotyledons stay underground; however, new cotyledons will form.